In my 35 years in the markets, I have never seen such complacency while so much downside risk lies in wait.

On Monday, the Dow had its highest close since February… while the S&P 500 recorded its second-highest close in history.

It seems that an awful lot of good news has been priced in, while the potential bad news is systematically ignored.

Today, I’ll give you two important reasons why the market’s optimism is misguided.

For one, we haven’t gone through a winter yet with Covid-19, and the outbreak in Europe looks set to get worse and worse.

The whole continent is exploding with record numbers of infections, and winter hasn’t even set in yet.

As an example, the two charts below give you a good feel for how France has been faring with the virus recently… 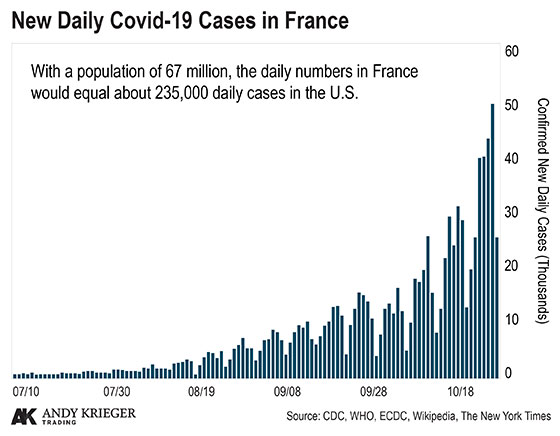 This sort of daily total simply can’t be ignored… And the rest of Europe is on a similar trajectory, putting its governments in a terrible predicament.

The virus may not be super-deadly, but European hospitals are starting to buckle under the strain of too many patients.

Several European countries – including Germany, Portugal, and France – have already declared at least partial lockdowns. If things get much worse, others will have no choice but to shut down as well – at least to try to reduce the pressure on their health care systems.

The U.S. is not far behind, although the chances of a nationwide shutdown are slim. I would expect the situation here to be decided on a state-by-state basis.

In any event, the economies in Europe and the U.S. will suffer as people start to hunker down for a long winter.

Even with Pfizer’s vaccine news this week, there’s little chance that a vaccine will be broadly available before the end of the winter. That means we’re likely to struggle with Covid-19 for quite a few more months.

Depending on how the authorities act, the struggle will be either very challenging… or catastrophic.

Now, Covid-19 is only one of the negative factors that clearly hasn’t been priced into the markets yet. The failure of Congress to pass an emergency stimulus measure before the election is another one.

When people like Larry Kudlow – director of the U.S. National Economic Council – suggest that we are having a V-shaped economic recovery, it is almost laughable.

If things are so great, with such robust growth, why are the central bankers warning us that a failure to implement a massive stimulus package now will be catastrophic?

Someone is either lying or simply very wrong. Both can’t be right.

Unfortunately, without new stimulus measures in place, we could be getting ready for an awful Christmas shopping season.

Roughly 21 million people are still receiving some sort of unemployment benefits, or have applied recently and are waiting for approval, according to the latest data from the U.S. Department of Labor.

Most states provide 26 weeks of unemployment benefits, so millions of workers have already exhausted their regular state benefits. Moreover, at least 5 million workers have dropped out of the labor force altogether.

Some sort of extension of benefits for these workers would have been enormously helpful to these people, but now it seems that they will have to tough it out until early February.

Now, let me be clear: I don’t like the strategy the Federal Reserve has followed for many years. Debasing our currency with free money only masks the depths of our economic ills.

I am also torn about the ever-deeper hole we are digging with our accelerating fiscal deficits. But I feel strongly that additional fiscal spending would have been the right thing to do when so many people are struggling.

Delaying this much-needed support because of political partisanship is just wrong. In fact, it feels dirty and sordid.

I am sure that if Congressional members were personally suffering financially, or if the equity markets were tumbling, they would have handled the stimulus spending negotiations very differently.

Unfortunately, it was easy to see that the Democrats and Republicans would reach an impasse for all the wrong reasons.

This is why, in a previous writeup, I said the failure to pass the stimulus package was one of the main risks our markets were facing over the next three months. As that risk materializes, it could easily push us into a double-dip recession.

That’s why I’ve been urging caution with equity holdings. Keep these risks in mind as the market continues to climb higher over the short term.

Like what you’re reading? Send your thoughts to [email protected].