After the market closed yesterday, trading legend Andy Krieger sent me the below analysis on a troubled country’s currency…

And I found it so valuable for traders heading into today’s session, I had to pass it along to you.

Consider it a small taste of the trading analysis that Andy uses to regularly move positions worth hundreds of millions of dollars. And, if you haven’t already, be sure to sign up for Andy’s BIG trade event next Thursday, February 20. At the event, seven lucky attendees will be chosen to receive Andy’s research and trade recommendations completely FREE.

The Australian dollar (AUD) has been under heavy pressure lately. And it shows no signs of stopping.

Since the start of 2020, the AUD has lost over 5% of its value relative to the U.S. dollar (USD). That’s a significant move for a major currency…

I’ve been short the Aussie dollar for some time, and that trade has paid off handsomely. But it’s still one of my favorite shorting opportunities right now.

Now, though, the Australian economy is facing headwinds.

The U.S.–China trade war slowed the Chinese economy significantly, digging into the exports of Australia…

The bushfires have caused massive property damage, terrible loss of wildlife, and the almost unimaginable destruction of 186,000 square miles of terrain…

And just when things started looking better – with the partial resolution of the trade war, along with heavy rains to put out the raging bushfires… The country is now faced with its biggest challenge yet: the coronavirus outbreak in China.

As a result, the land down under is getting clobbered again… and its currency along with it.

Just take a look at the chart below… 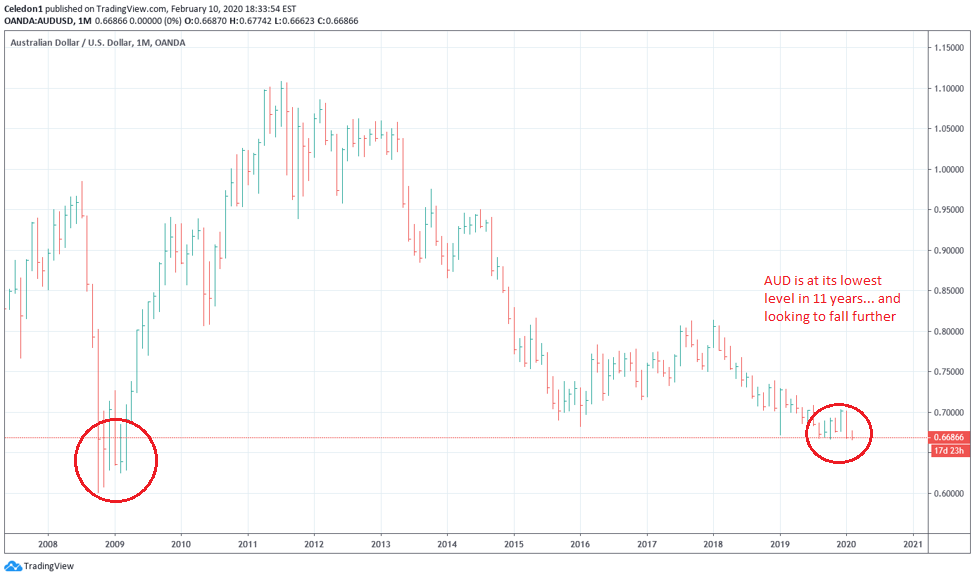 On Friday, the pair closed around $0.6675. That’s the lowest level in nearly 11 years… and the fundamentals suggest it may have much further to fall.

So, it’s already dropped nearly 18% over the past two years… What could possibly cause it to fall further?

As I mentioned above, the coronavirus is the biggest threat.

It’s still too early to say how weak the first-quarter economic numbers coming out of China will be. But many economists forecast they’re somewhere between ugly and absolutely hideous.

As the coronavirus has brought much of the Chinese industrial production and travel to a standstill, I think these numbers are likely to collapse in the first quarter of 2020… And lead to a knock-on effect which drives the AUD down to levels we haven’t seen in nearly 20 years.

And there’s another key headwind for the Australian dollar…

It’s very possible, depending on the scale of the coronavirus impact, the Reserve Bank of Australia could be forced to act and cut interest rates further. Aggressive monetary easing – through not only interest rate cuts, but potentially even quantitative easing (money printing) – could very well be the result. This would weaken the AUD further.

But if China’s economy goes into a real tailspin as many predict, then we should expect the AUD to follow. A move towards the lows of 2009, around the $0.6010 level, is certainly realistic. That would be another 10% drop.

Even a move to $0.6250 would be a big move, and that is entirely reasonable if the coronavirus inflicts much more damage to the Chinese economy.

I’ll refine my forecasts over the coming weeks as we see how things play out.

In the meantime, though, currency traders can look to trade this move by looking to sell short the AUD/USD currency pair between $0.6705 and $0.6735, risking about 1% on the trade. That would offer an excellent risk/reward ratio on the position.

P.S. Next Thursday, February 20 at 8 p.m. ET, I’ll reveal the details of an imminent Black Swan event that could have a serious impact on your wealth…

If you follow my advice and position yourself correctly, you stand to make a fortune… Ignore it, and you may be putting yourself in immeasurable risk.

Click here to reserve your spot, and secure your chance to receive my trading research and guidance completely free.