Mike’s note: Mike Merson here, managing editor of Trading Icons. Before we get to today’s essay, I wanted to let you know that Andy Krieger – whose trading insights we’ve regularly shared with you this week – will soon come forward, for the first time in years, to reveal the biggest trade of his career.

The event goes live this Thursday night at 8 p.m. And anyone who attends will have the chance to receive his upcoming trading research for free.

Now, on to today’s essay…

Recently, I saw an email from Andy hit my inbox. He had written a new piece of analysis that he just had to send your way.

It’s about a peculiar, forgotten trade… One that might be coming back in style. Read on to learn how you can profit right now, and why now’s the exact right time.

I have ignored the euro for quite a long time. Frankly, it’s been so stable that it’s difficult to trade… and even a bit boring. Many friends of mine haven’t bothered trading it in months.

So, it felt a bit strange several weeks ago when I recently decided to play the euro once more – specifically, the euro against the U.S. dollar (EUR/USD).

The pair has quietly worked its way lower over the past month, grinding its way to levels not seen since 2017. Though after being so quiet, for so long… at first I was skeptical about whether the recent weakness could turn into a major trend.

Now though, I believe that the answer is a resounding yes!

We are still in the early stages of the euro’s weakness, and the EUR/USD pair is still remarkably quiet… but if you’re patient, you’ll be well rewarded. 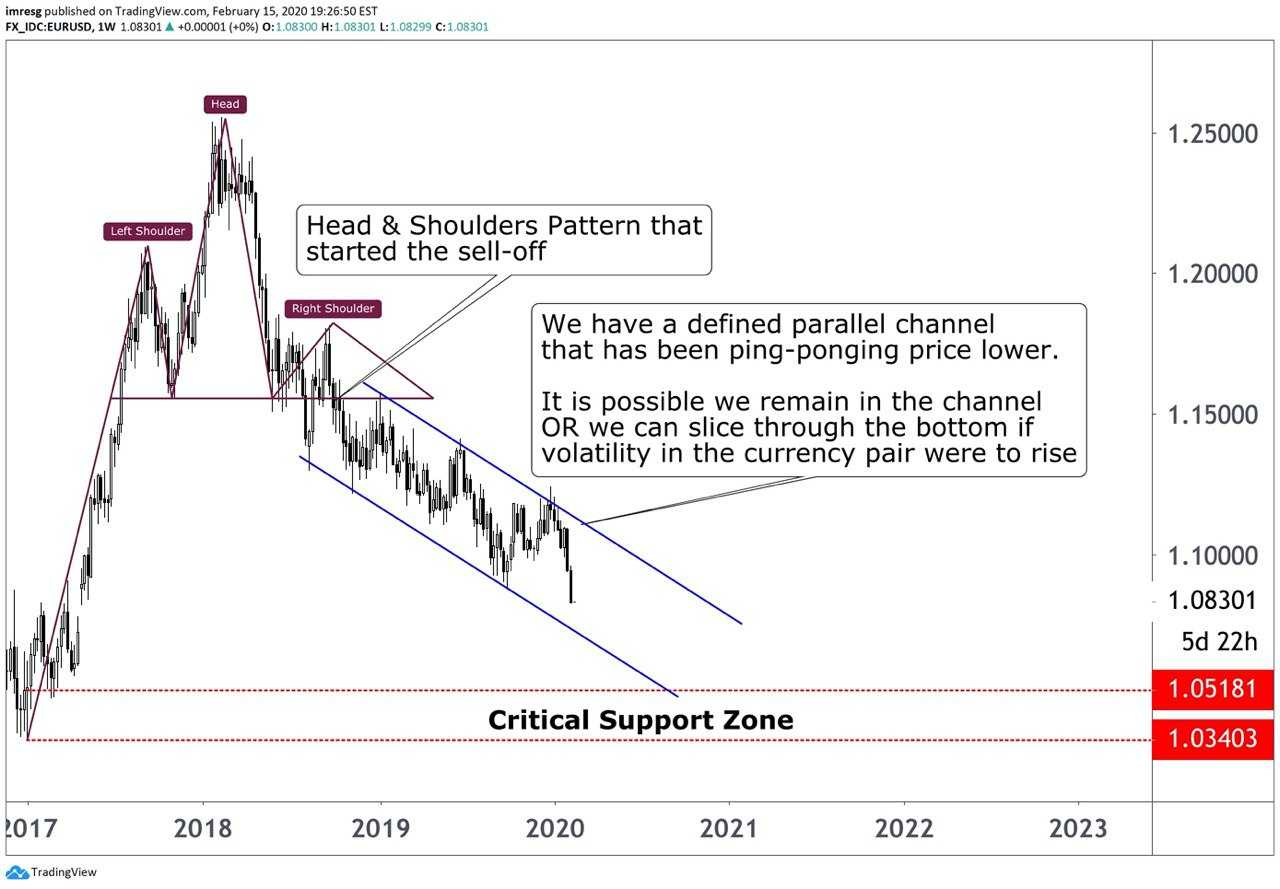 However, the macroeconomic developments in the U.S. and Europe in recent years have been diverging, so it makes little sense for their currencies to trade in such a narrow range.

Upon further inspection, though, you will note that the euro has been slowly creeping lower since mid-2017. What you’ll also see is that the euro could head MUCH lower if it breaks through certain key support levels against the U.S. dollar – namely the low just below 1.05 from the end of 2017.

I believe this is mainly due to the increasingly poor monetary situation in the eurozone – especially compared to the U.S.

Europe is stuck in a cycle of negative interest rates, crushingly high levels of unemployment, undercapitalized banks, and fiscal inflexibility. It appears the grand experiment of the European Central Bank (ECB) is in danger of imploding.

Meanwhile, the U.S. has its lowest levels of unemployment in 50 years. U.S. banks have ample capital, and they are well equipped to face serious challenges if necessary. The projected annual GDP growth rate in the U.S. is a respectable 2.5% – far better than the projected rate of 0.9% in Europe. Nominal interest rates in the U.S. are over 2% higher than the rates in the eurozone… and barring a major shock to the system, U.S. rates are unlikely to go much lower anytime soon.

Plus, the U.S. has proven to be quite aggressive when it comes to deficit spending to support economic growth, while Germany – the only country in the eurozone that is running a surplus – is allergic to spending its money to support the European economy.

One might wonder, “Why sell euros now?” What makes me immediately bearish on the euro? The eurozone’s negative fundamentals have been in place for some time, but the market has essentially chosen to ignore them, with the result being an unnaturally stable currency.

One key factor driving my view is that Europe is extremely vulnerable to a slowdown in China. China is one of the largest importers of European goods and services, so the economic meltdown in China will hit the two biggest economies of the eurozone – Germany and France – very hard.

With China’s growth rate set to plunge in the first quarter of 2020 (and maybe beyond), Europe is going to get slammed. European exports, a crucial component of European economic stability and growth, will surely be disappointing, and well below the expected levels for the year. In fact, my bet is that before the first six months of 2020 are done, we will see some sort of concerted economic support by governments and central banks to deal with the coronavirus outbreak once the economic impact becomes clear.

And that clarity may cause traders to look more deeply at European fundamentals. My guess is that once people analyze the data carefully, the prospects for a weaker euro will become overwhelmingly apparent.

Another factor is that the eurozone has seen tepid growth over the past decade, despite trillions of euros worth of easy money being pumped into the system. It is in this way that the ECB’s experiment is failing. The limits of monetary policy are being tested. What happens when Europe goes into its next economic downturn?

Monetary policy is another negative factor for the euro. Negative interest rates discourage foreign investment in short-term euro-denominated money market instruments. In fact, the lower the euro goes, the more the global investors with eurozone exposure will feel the pressure to hedge their euro exposure and rotate into the dollar.

In fact, I have received numerous calls from people in Europe who are fed up with the current situation – in which they must pay their bank about 1% in order to deposit euros into their account. They are progressively more willing to convert their euro savings into dollars to earn some interest, taking on some currency risk in the process. They feel that the euro’s upside potential in this environment is negligible, so holding dollars becomes sensible by default.

The problems in Europe are so extreme, I doubt the euro will respond to any significant uptick in risk sentiment over the coming weeks and months. I advise all traders to prepare for a continued decline in the euro by selling short the EUR/USD currency pair.

It will probably grind slowly lower for a while longer… but if things play out just right, the euro’s slide right may start to accelerate and develop into a powerful down move.

You’ll earn good money shorting the euro due to the interest rate differential, and likely pick up a sizable capital gain over time – but don’t forget to keep a trailing stop. I think a trailing stop of 1% is sufficient to prevent any losses in the event of a strong reversal.

P.S. This Thursday night at 8 p.m., I’m coming forward after years of silence to reveal what could be the biggest trade of my career – and yours.

In short, I’ve spotted a unique pattern of compression across multiple asset classes. It’s signaling a massive turning point in the markets, due just months from now, and it’s imperative that you prepare now.

That’s why I’m coming forward. It’s simply too important not to share.

This big trade will be the basis for an apprenticeship program I’m starting… If you want to be a part of it, with the chance to do so for free, sign up for this Thursday’s event.